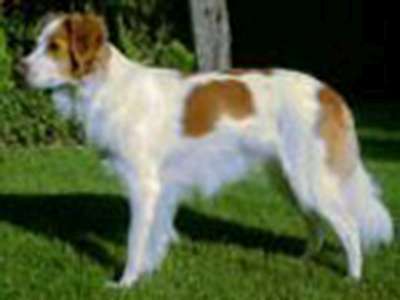 A young breed that remains rare even in its home country, the Kromfohrländer nonetheless has a devoted following around the world. The only dog known to have been descended from a military mascot, the Kromfohrländer is a delightful and devoted member of any household. The sweet nature and fine temperament of this dog makes it easy to train and rewarding to own.

High-spirited and intelligent yet lacking both aggression and timidity, the Kromfohrländer is an ideal companion dog. Robust, inquisitive, loyal, obedient and totally devoted to its family, the weak hunting instincts of the Kromfohrländer mean the dog does not roam and rarely strays too far from. They tend to be quite reserved when meeting strangers for the first time but once they become familiar, they become playful and docile. The breed is sometimes referred to as the German Terrier while fanciers refer to them simply as Kromi.

The Kromfohrländer is a medium seized dog with a full grown specimen standing between 38 and 46 centimeters at the shoulder. Adult males weigh from 11 to 16 kilograms while adult females are slightly smaller, usually weighing in at between 9 and 14 kilograms.

There are two distinct varieties within the breed: one with wiry hair (Rauhaar) and the other with smooth hair (Glatthaar). The Rauhaar has a beard, resulting in look that is somewhat close to that of a terrier, while the Glatthaar has no beard and more closely resembles a toy spaniel. In both varieties the dogs are white with light brown, tan or very dark brown saddle patterns on the body.

With regard to the head, the breed standard calls for light brown, tan to very dark brown markings on the ears, above the eyes and on the cheeks which are as symmetrical as possible, divided by a white blaze.

Compared to most others, the Kromfohrlander is an extremely young breed having come into existence shortly after the end of the Second World War. It was a chance encounter between a black and white female fox terrier known as Fiffi and a French pointing dog named Peter who was most likely a Grand Griffon Vendeen but possibly a Bretton Griffon, that led to the creation of the new breed.

Peter, who had been taken on as a military mascot taken on by American soldiers travelling through France, found a new home with professional piano player Ilse Schleifenbaum in the West German county of Siegerland. Fiffi lived in the house next door and the pair soon mated, producing a litter of yellowish brown and white dogs that resembled one another but did not look like any other dogs in existence. Attractive, sweet-natured, Schleifenbaum was intrigued and immediately set about producing more of the new breed. She named the dogs after the region where she lived: Krumme Furche which translates as "crooked furrow". It took 10 years of hard work before, in 1955, the German Kennel Club officially recognized the new breed.

Obedient and agile, the Kromfohrländer has a high level of intelligence, making it easy to train. A notable feature of the breed is that it does not generally smell. This, combined with coat that needs very little maintenance, makes the Kromfohrländer a dog that gives much in the way of companionship but requires little in the way of day to day care.