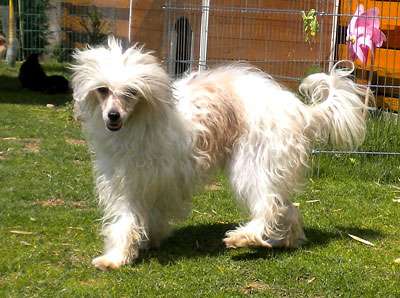 Chinese cresteds are among the most unusual-looking small dogs: and that is saying something, given the immense variety that exists within the canine world! They come in two distinct sub-sets; the hairless and the ‘powder-puff’. Any litter can contain specimens of both types, so both are classified as Chinese crested, regardless of whether they have a coat or not. The powder-puff has a long coat all over, with longer tufts in the areas that the hairless variety have their only patches of hair, namely, on the head and neck (similar to a horses mane, almost), on the feet and ankles and on the tail.

Sadly, many people do not even know that there is a coated version of the Chinese crested and some breeders ‘bucket’, or kill off shortly after birth, any powder-puff puppies, claiming that they are less popular and therefore less valuable. This practise may very well soon be shown to be a mistake: each dog carries one hairless and one coated gene (hence the ability for dogs of either type to be born in a litter), but should any animal have two hairless genes, this always proves fatal… Killing off the coated offspring could dramatically reduce the breeding pool from which healthy dogs of both types can be reared, leading to inbreeding with all its associated genetic issues.

Hairless Chinese cresteds are the most popular type of hairless dog, but they are still classified as a rare breed. The origin of the breed is somewhat confused: some claims allege that the dogs were originally found in Africa, by Chinese sailors who carried the animals, in a somewhat larger frame than they are bred for today, back to China for use as hunting dogs, but recent scientific analysis claims a familial connection to the Mexican hairless. What is accepted is that the breed made its way to China and were used both, as previously mentioned, as hunting dogs, but also, in their smaller form, as treasure house guard-dogs.

The powder-puff type need a lot of grooming as they feature a double coat, under all that long hair which easily picks up burrs and dirt. The hairless variety self-groom, keeping themselves scrupulously clean, and it is often remarked that they do not have that typical ‘doggy’ smell about them. Being hairless over much of their bodies, they do tend to feel the cold a lot, and should wear a coat when out and about in colder weather. Owners should be warned against kitting their crested out with pure wool though, as the breed tends to be allergic to wool and lanolin. They can suffer from sunburn, just like us hairless humans, and a reliable, dog-friendly sun-screen should be used. The hairless variety do suffer from dental issues too, while the coated powder-puffs tend to have inherited the ‘good teeth’ traits. Their coats (including the tufts and patches on the hairless specimens) can be any colour, and the skin of the hairless cresteds often features spots of blue or brown on pink and vice versa.

Personality-wise, Chinese cresteds are friendly and playful dogs. Boisterous rough-housing is not encouraged with the hairless variety as they are more prone to injury than dogs with thick, protective coats. It is easy to spoil a Chinese crested, but this should be discouraged as it can encourage bad behaviour and the animal coming to think of itself as being the pack leader, instead of giving way to its humans. They must be well socialised from puppy-hood as they can quickly become either shy and timid or aggressive and snappy with poor handling.

While some samples of the Chinese crested – both hairless and powder-puff – can be very attractive, with large, clear eyes, neatly shaped heads, it is a fact that the Chinese cresteds, both pure bred and mixed specimens, have dominated the ‘world’s ugliest dog’ competitions for much of the contest’s forty-year history.