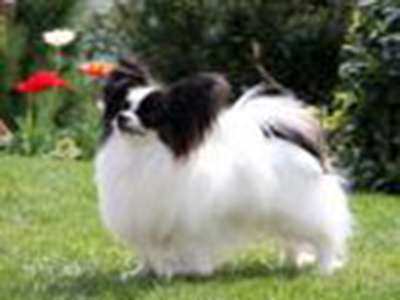 This is one of the oldest dog breeds in the world and records of the Papillon date back around seven hundred years in Europe. The breed was widely depicted in paintings by many of the Italian masters in the 13th and 15th centuries and was particularly popular among Spanish noblewomen. The Papiillion was recognised by the American Kennel Club and although this is not primarily a working dog it has a number of skills including agility, the ability to serve as a watchdog and performing tricks.

The Papillon is also called the Continental Toy Spaniel and is a small, fine-boned dog that has a small, slightly rounded head that features a well defined stop. The short and thin muzzle tapers to the nose, while the eyes are dark and round with black rims. The large ears sometimes drop, while the ears have long, fringed hair. The tail is set high and covered with long hair, while the single coat has an extra frill on the ears, chest, tail and back of the legs. The coat is usually white with patches of various colours and a mask that covers the eyes and ears, running from the back to the front. The breed is also sometimes referred to as the butterfly dog after the fact that its ears resemble butterfly wings.

This friendly and intelligent dog is fairly tough and loves spending time outside. The Papillon is friendly and often comical and extremely charming. If the Papillon is given a lot of affection and encouragement it will be very loyal to its family and loves to be cuddled. If the breed is socialised well from an early age it can relate well to cats and other animals. It is important to start training early, as the Papillon can be difficult to housebreak and can be very possessive. The Papillon will be calm and caring if it receives enough exercise and is very good with children, although the breed has a tendency to suffer from anxiety disorder and display behavioural problems if it is left on its own for long periods of time.

This breed sometimes has kneecap and hind leg problems that can be corrected with surgery, although care should be taken as the Papillon sometimes has a difficult time under anaesthesia.

This breed can live well in the city, although it sometimes has trouble adapting to an apartment because it tends to bark at excess noises and should be kept in a relatively quiet environment.

Although the Papillon needs a daily walk, it loves to play and regular play such as ball games will fulfil most of the breed’s exercise needs. However, like most dogs, the Papillon has a primal need to explore and can develop behavioural problems if this need is not satisfied. The breed’s long, silky fur should by combed and brushed for at least a few minutes every day. It has odourless fur, which means that it does not usually need to be bathed very often and spraying with dry shampoo is usually all that is required. The nails should be clipped regularly, while the teeth of this breed need to be cleaned at least every few days to prevent tartar from accumulating.