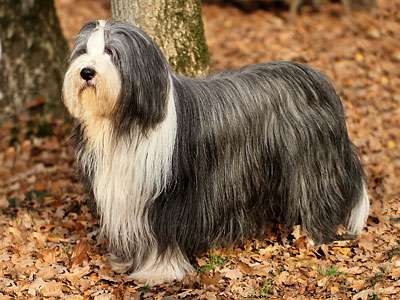 The Bearded Collie, or "Beardie" , is an active, hardy dog with a shaggy coat, and an exuberant personality. Known for their "Beardie bounce", this breed's existence has been recorded since as early as 1891. Originally known as the "hairy-moued" Collie, it was commonly found herding sheep in the Scottish hills, working primarily as a drover, used to being left to find its way home after his master boarded a ship and sailed off. This quality is still seen today; the Beardie is an independent dog, with a mind of his own, and an uncanny ability to discover new things, such as how to open a gate, or steal food off a kitchen counter. There is rarely a dull moment with a Beardie in the house.

The Bearded Collie has been recognised since the inception of the Kennel Club, and its Breed Standard remains relatively unchanged. The interpretation of it is something else again, and many show Beardies are coming into the ring with coats obviously trimmed, which is specified as a serious fault in the standard. Other faults include a snipey muzzle, an excessively long silky coat, and a flat or steep croup. The hocks should be set low to enable the quick changes of direction and spring-like jump that are necessary for herding.

The Bearded Collie is a a happy dog with an even disposition. There are always exceptions to the rule; some are rather timid, some as bold as brass, but they should never be fearful or aggressive. This is atypical of the Beardie. They are intelligent, but inclined to do things their own way, and often, obedience classes and trials end up being a bit of a circus. But, with an early start, and a lot of patience, many Beardies go on to excel in obedience as well as in agility. Possessing a natural herding instinct, some Bearded Collies are crazy for flyball, and there are others who look upon it as an exercise in futility. Again, temperaments vary. If you are considering owning this breed, it's a good idea to do some research; ask the breeder what type of temperaments are typical in their line of dogs, so you can find one that has the qualities you are looking for.

The Bearded Collie has a harsh, shaggy double coat which requires regular brushing, (at least once a week with a good quality pin brush) but, for show purposes, must never be trimmed, or modified with chalk or sprays of any kind. Puppies are born with one of four distinct colours: black, blue, brown or fawn. They can have varying degrees of white marking, on the feet, tip of the tail, as a shawl, and on the muzzle. White markings extending beyond these areas are considered mismarks. Most Beardies have a fading gene, with blacks ending up a slate or silver-grey, and browns a cinnamon colour. Eye colour is of great importance; the eyes must tone with the coat colour. This imparts the proper wistful, enquiring expression for which Beardies are so well known.

Bearded Collies, for the most part, remain a natural, unspoiled breed, and have not been excessively bred; therefore they have relatively few genetic health problems. Hip dysplasia has become more frequently seen, as well as eye problems and reproductive issues. Addison's Disease, an autoimmune disorder, is becoming more common also, but they are mostly a happy, healthy dog that has a lifespan of roughly 12 years, with many living much longer. The Bearded Collie's future looks bright.