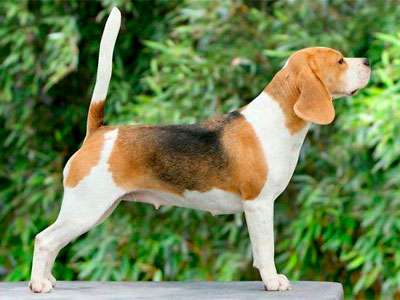 Beagles are known as "scent hounds"; their defining characteristic is their exceptional sense of smell, which makes them extremely competent trackers, such as for tracking deer or foles. However, this trait has served them well as modern working dogs, making them the breed of choice for trackers of illegal substances and items in ports, airports and border crossings.

In terms of general appearance, the Beagle is not unlike the Foxhound, albeit smaller in stature. However, they sport a wider skull and shorter muzzle, also wearing an entirely different expression. The breed generally comes in at around 13 to 16 inches in height and weigh in at around 18 to 35 pounds. The bitches are typically smaller than the males on average.

The Beagle's skull is dome-shaped in appearance, with a protruding, square muzzle. The nose is typically (though not exclusively) black. The upper teeth overlap the lower, locking in symmetrically to the shape of the muzzle. the Beagle's eyes are generally expected to be hazel or brown in colour, and the sizeable ears are long, soft and slightly inward-facing, being rounded off at the ends.

In terms of their physique, Beagles sport a broad chest, which narrows into a much thinner abdomen and is tapered off by a long tail, with some curvature. It is common for the tail to be tipped white like a paint brush, a feature that is termed "the flag". This is in fact a trait that has been specifically bred into the Beagle, as it makes the dog easily distinguishable while the dog has its head lowered and is tracking.

Beagles are not typically aggressive in nature, nor are they shy. They are also quite tolerant of strangers, which does not make them an ideal choice for a guard dog. Due to their non-aggressive and excitable nature, they are easily a family dog and can live alongside children with little issue. However, their personable nature also means that they can be prone to separation anxiety, which is one of the most common situations that is likely to lead to howling within the breed. Beagles also generally get on well with other dog breeds.

The Beagle is intelligent, yet its single-mindedness means that training and retaining knowledge can be difficult. They are also easily distracted by scents in the environment, due to their exceptional sense of smell. This can also make it difficult to recall them, if they pick up a scent outdoors.

Beagles do not really have much of a problem with inherited health conditions. One of the biggest issues facing Beagles is obesity. This can be worsened if the dog also develops hypothyroidism, to which this breed is prone. They are also prone to some types of dwarfism, as well as epilepsy, though the latter condition is controllable with medications.

Unfortunately, the structure of the Beagle's ears means that the breed is susceptible to ear infections, where inadequate ventilation to the inner ear is a problem. They are also susceptible to a number of eye conditions, including corneal dystrophy and glaucoma.