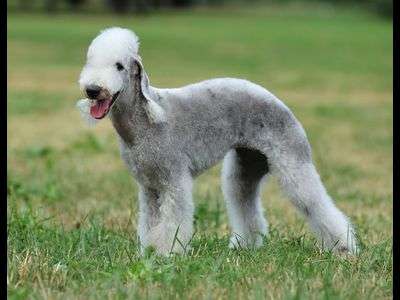 At first glance, the Bedlington has a lamb-like appearance, with its soft curly coat and pear-shaped head. The muzzle is strong and flat, and the ears are low-set and triangular in shape. The small and deep-set eyes are almond in shape, and tend to colour with the coat, with the blue having the darkest eyes, and a sandy or tan coat having corresponding hazel eyes, as well as lighter eye rims. The eyes should have a bright and alert expression. The coat comes in shades of blue, sandy, tan, blue and tan, sandy and tan, and liver and tan. There may be tan markings on the chest, legs, and hindquarters, as well as in spots over the eyes - this is perfectly acceptable.
Ideally, males should be 16 - 17 inches (41 - 43 cm) in height, and females slightly smaller, at 15 - 16 inches, or 38 - 41 cm. Both males and females should weigh between 18 and 23 pounds, or 8 - 10 kg. The hind legs should be higher than the front legs, and there should be a noticeable arch to its back. The tail should be low-set, and go from thick to thin from base to tip. This is commonly referred to as a "rat's tail." The Bedlington is born with dewclaws, which are usually removed.

Bedlingtons are one of the more docile of the terrier breeds, but they still possess the main characteristics: they are often described as feisty, stubborn, and extremely active. They must be trained from an early age, as they are extremely quick to bark and love to chase. Caution must be taken when they are let off leash; they will chase anything that moves, and they are fast and agile. They will not back down from a fight, and are inclined to start one. It is essential to provide enough exercise for this breed, or they will become high-strung and develop bad habits, such as barking and digging. On the other hand, with plenty of activity, the Bedlington does well indoors, and is a good-natured and inquisitive family member. This breed is relatively easy to train - they are intelligent and quick to learn, as long as there is no harsh treatment involved; in spite of their feistiness, they are sensitive dogs.

While a relatively healthy breed, the Bedlington Terrier is prone to canine copper hepatotoxicosis, or copper storage disease, a condition in which copper builds up in the liver, causing hepatitis and cirrhosis. Terriers seem to be particularly susceptible, and, while the cause is not specifically known, it is believed to be the binding of copper to proteins in the liver. This breed is also prone to eye problems such as cataracts and retinal conditions. Thyroid and kidney issues are also seen.

The Bedlington has a double coat, which stands out from the body. The coat sheds virtually no hair, making it an ideal choice for allergy sufferers. They do require clipping every six weeks or so, and show dogs require extra attention.

The Bedlington has a long lifespan, with many living up to 17 years, and they remain active well into their later years.