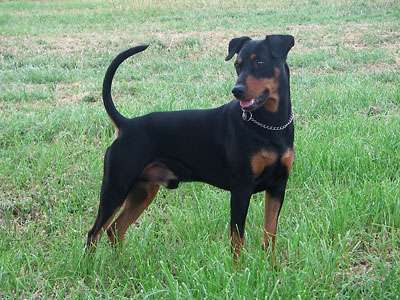 The German Pinscher is an agile, healthy, highly energetic, strong-headed, aggressive, and loyal breed that demands a high hand and leadership qualities from its owners or trainers. This standard Pinscher is not for meek people. It needs to be trained, reminded of its place in the household and to obey instructions, else may get too bossy to handle.

A native German breed, the German Pinscher pedigree can be traced back to the Tanner (14th century) and the earlier German Bibarhund from the 7th century. Subsequent cross-breeding efforts with black and tan Terries resulted in RattenFangers (rat hunters), aka Pinschers. Threatened to extinction after the World War II and cross-bred with their own descendants, large male Miniature Pinschers, this breed has managed to survive the test of time. It’s worth noting that the German Pinschers, which are similar, yet distinctly different from Schnauzers, were also instrumental in developing the Doberman. Primarily vermin hunters and guard dogs, German Pinschers still retain their killer instincts.

German Pinschers are hyper-active, bossy, stubborn, aggressive and possessive by nature. They need a firm, yet gentle upper-hand to train them during their initial years. They can prove to be a docile, obedient and loyal ward under constant vigil. The breed is also known to be strictly territorial and does not tolerate any intrusions into its space, even if playful or accidental. This means these dogs don’t make good pets for homes with small children.

German Pinschers are on the lookout for moving prey and are pretty quick to chase and hurt or kill small animals, including cats. Leaving them unattended in the open is not advisable. A hard bite is always the first response if provoked or while defending its people. This breed stands its ground when challenged and doesn’t back away. A loud bark is the characteristic greeting extended to strangers.

Both male and female German Pinschers grow to be around 16 - 20” tall and 11 - 16 kg in weight. With its head shaped like a blunt wedge, this medium-sized dog, with symmetrical cropped or natural ears sport a glossy coat of black with tan marks, dark brown with yellow marks, red fawn or black and tan.

The German Pinscher is a naturally strong and healthy breed with no major health concerns. Regular hip and eye tests should suffice. The short, smooth and shiny coat hardly needs any elaborate care, but regular washing and grooming is important.

Training the German Pinscher is not as said for the meek or gentle. Strict training is a must to temper the breed’s innate possessiveness and stubborn qualities. Routine socialisation again is needed to help him distinguish between normal and suspect behaviour in humans, simply to minimise the possibility of unprovoked self-defensive aggression when at public places, and improve its ability to protect and warn the family at the right time.

The German Pinscher maintains eye contact with the trainer and is highly intelligent in processing reactions. A bored German Pinscher is agitated, barks excessively, resorts to destructive chewing and can get quite challenging to control.

Regular exercising, walks, sprints, chases and sporting activity can keep this breed happy and active. While at home though, the German Pinscher won't simply curl-up in the corner and will not hesitate to follow its master around the place.

German Pinschers respond well to demanding and commanding trainers. They are playful, affectionate, immensely loyal and protective; but, in permissive hands, they can create quite a ruckus.