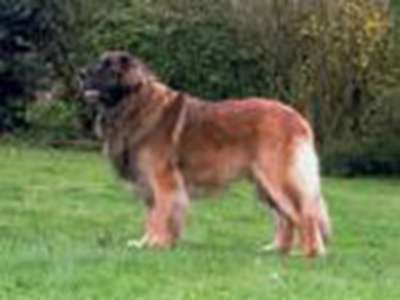 The majestic Leonberger was developed in Leonberg in Germany in 1846 by Heinrich Essing by crossing the St Bernard with the Newfoundland and the Great Pyrenees. Essing was deliberately trying to create a breed that resembled a lion and this breed become so revered that it was the favourite among royal families throughout Europe including Empress Elizabeth of Austria, Napoleon II of France, the Prince of Wales and Italian King Umberto. A large number of Leonbergers were imported to Russia in the 19th century before finally being imported to the USA in 1971. This is a very versatile breed and in addition to serving as a family pet, over the years the Leonberger has been used for tracking, water rescue, guarding livestock and search and rescue.

This massive, muscular dog has a rectangular head that is slightly deeper than broad, while the skull is domed slightly. The distinctive black mask should only reach as far as the top of the eyes rather than extending over the entire head, while the muzzle is rather long. The breed’s large nose is always black and features clearly outlined nostrils, while the black lips and usually tight and dry. The ears are medium in size and triangular, hanging close to the head with the tips of the ears being level with the mouth. The double coat is medium to long and water resistant and comes in a range of different colours including yellow, sand, golden, red and pale yellow, while the breed’s distinctive look is created by a thick mane of hair that is particularly pronounced in males.

The Leonberger has a very affectionate and lively nature that has a tendency to get out of control if the dog is not given a firm hand from an early age. The breed takes to strangers well and loves to play with children. Despite its large such, the Leonberger is much more coordinated and gentle than most other breeds of large dog and is safe even around very young children, while they dog is very loyal and has a need to please. The Leonberger has a tendency to drool slightly, especially when sleeping, and can also snore from time to time.

Like all giant dog breeds, the Leonberger is prone to hip dysplasia, bone defects and eyelid defects and has a tendency to exhibit behavioural problems if not trained and cared for correctly.

The Leonberger is a hardy breed and can live either outside or inside, although it prefers to be as close to its human family as possible and thrives in cool climates. This breed is relatively active indoors and is too large for an apartment, requiring a fairly large garden to run around in.

It is important to make sure that the Leonberger receives a long daily walk each day as well as a variety of activities. The breed loves to swim as well as perform tasks such as pulling a cart. The breed is adaptable to various different environments and is the ideal companion on family trips. Brushing with a stiff bristled brush must be done at least once a week, while the ears and teeth also need regular cleaning. The longish fur is prone to matting and should be checked regularly, especially around the ears, tail and nose.