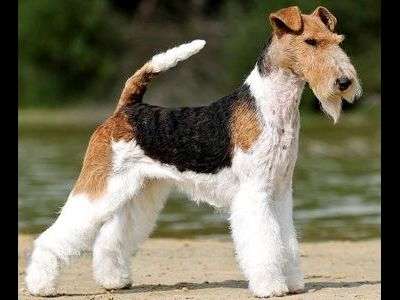 A defining characteristic of the wire fox terrier is its high levels of intelligence; an aspect shared throughout the entire terrier community. Its distinctive appearance of containing a slight "beard" has made it an attractive and visually distinct choice for owners. Weighing between seven and nine kilogrammes, these are relatively small dogs and their personality reflects a rather playful and even mischievous nature. Wire fox terriers are known for their attentive nature, their playfulness and their excellent rapport with children

As mentioned previously, these terriers can burst with energy; especially at an early age. However, this animal can also be quite a handful due to the nearly constant amount of attention that it requires. It is important to note that as this type of terrier was bred for sport and hunting, it can be a very independent thinker. In simpler terms, it may not always do what it is told. This is one of the primary reasons why training should be provided at an early age. Unfortunately, many terriers are abandoned due to this very willful nature. They also can be given away arising from the fact that they have a hunting instinct. Instances of chasing other animals such as cats and small dogs are not uncommon but once again, these can be mitigated thorough proper training.

While the independent personality of the wire fox terrier is certainly present, this dog is also extremely loving towards people. The main goal is to attempt to find a balance between this affection and a rambunctious nature that defines the breed itself.

Like many terriers, the wire fox variety was bred in England during the eighteenth and nineteenth centuries as a hunting dog. It was particularly adept at rooting out foxes and vermin. This terrier is thought to be a direct offshoot of the black-and-tan working terrier that was found in Wales. An interesting historical note is that its characteristically short tail was used as a "handle" to pull it out of a hole once it located a fox den.

The hair of a terrier is often stripped by hand. This will almost always occur if the animal is used for show. This is done to help maintain the gloss and colour (normally white with splotches of tan, black or grey) of the coat. As all terriers tend to enjoy playing, they should be given a bath at least once a month and the hair needs to be inspected for fleas, ticks and mites. Thankfully, this is not as much of a concern as it is for breeds with longer hair such as golden retrievers.

Breeding is an important factor to take into account. A wire fox terrier should not be bred until it is at least two years old. This is done to avoid possible congenital defects which can be passed on to the offspring. Dogs that exhibit a predominantly white coat can become deaf in one or both years later in life. It is also common for wire fox terriers to develop cataracts as they grow older. If these become severe enough, medical treatment can be required. These terriers will live approximately fifteen years and some have been known to live up to twenty.

For those who are seeking a dog that is both loyal and spirited, the wire fox terrier is the perfect choice. Due to its longevity as well as relatively few medical problems, these dogs are perfect for families that can devote the time to such an energetic breed.